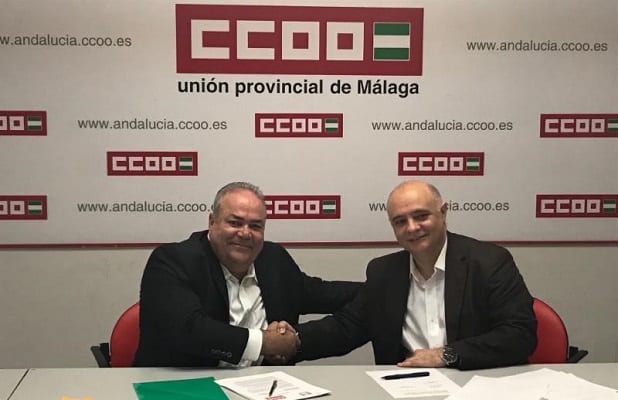 CCOO represents more than 12,000 workers employed in Spain’s civil aviation industry, both on the ground and in the air. There are CCOO members in all Spanish aviation companies, including Iberia, Vueling and Iberia Express, in addition to ground handling companies and air traffic management services.

“Airlines depend on international alliances such as One World, Star Alliance and SkyTeam,” said General Vice President Sito Pantoja. “Unions representing workers in these airline alliances need to coordinate their efforts as well. International trade union alliances such as this one overcome the barriers that geography and language may put in our way and ultimately allow us to improve our members’ lives.”

The Alliance Agreement, signed this week in Malaga, Spain, states in part:

We know that we must build an even stronger relationship if we are to successfully face the challenges that lie ahead. Globalization in the transportation industry has expanded the world to the point that what impacts each of us, impacts the other. Therefore, we must forge new and dynamic strategies that will have real and meaningful impact on our respective members.

In our continued cooperation, we will develop concrete programs aimed at strengthening trade union and human rights for transportation workers in North America, Spain and around the world.  Our cooperation will also include building a more solid understanding of the general and specific challenges, both domestic and international, that each of our members confront in today’s global economy. Our efforts will be guided by our joint commitment to oppose those air transport companies and third party providers which are oriented solely at obtaining bigger profits at the expense of the workers that are responsible for their success.