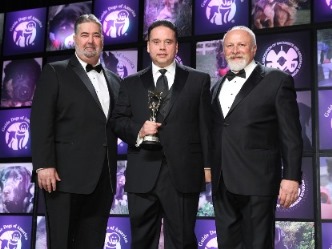 The “Gift of Sight” Award is given annually to recipients who have shown an extraordinary commitment to supporting GDA, which provides professionally trained guide dogs, free of charge, to blind and visually impaired individuals across North America.

“The commitment these two have shown to help improve the lives of others is astonishing,” said IAM International President Bob Martinez. “They have put forth and incredible amount of work to raise money for a charity that brings freedom to those who need it.”

“It’s a distinct honor to receive this award, and I must accept it on behalf of the great IAM Western Territory,” said Allen. “Their dedication to this worthy cause is inspiring. It is an honor to be a part of something that has such life changing impact as providing a guide dog to someone in need.”

WATCH: Guide Dogs of America Charity Banquet, to see highlights from the evening.

The successful weekend of fundraisers included the charity banquet with nearly 1,000 people in attendance, a golf outing with 250 golfers, the Hawgs for Dogs motorcycle poker ride with over 100 participants and a sporting clay event with more than 60 participants.

Guide Dogs of America provides guide dogs free of charge to blind and visually impaired men and women in the U.S. and Canada. It costs approximately $42,000 to train a guide dog and provide instruction for its user.