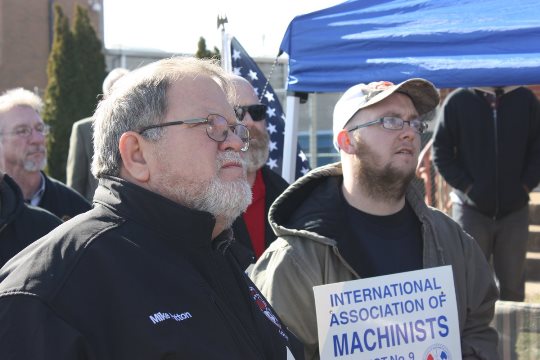 Nearly a hundred Machinists, labor union brothers and sisters, and community supporters converged upon St. Louis, directly in front of anti-union manufacturer American Pulverizer headquarters, to stand in solidarity with IAM Local 41 and 313 members on strike there. 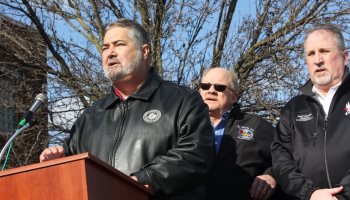 “If American Pulverizer wants a fight on their hands… brothers and sisters, I think it’s safe to say they sure got one!” said Gruber. “When you have a company that has been stripping away benefits throughout the last two contracts – and now they’re coming back for more – at some point, brothers and sisters, you have to say enough is enough. IAM members have helped build this company since 1948 – that’s almost 70 years! It’s time they showed us some respect.”

“Every IAM member across the United States and Canada supports you!” said Martinez. “You work hard for them! Put out a tremendous product. Make them money – $30 million last year to be exact. I want to remind you, American Pulverizer, who’s putting food on the table for you. Who makes all this possible? It’s my brothers and sisters on this strike line!”

American Pulverizer forced the workers to go out on strike 12 weeks ago when negotiations failed over the company’s proposal to roll 87 percent of health care costs onto the members, offer minimal and inconsistent wage increases, take away premium pay for overtime, and not guarantee holidays off. The company also wants workers to use their vacation time for things like medical leave, FMLA, and time off due to workers’ compensation. In addition, American Pulverizer wants to strip away workers’ rights to take part in union activity and change the “management rights clause” to give the company the ability to arbitrarily change work rules as it sees fit.

IAM District 9 has filed an unfair labor practice charge with the National Labor Relations Board, (NLRB).

“They think they can join their right to work (for-less) buddies and go after us. They think it’s open season,” said Martinez in reference to the Missouri GOP’s proposed right to work law in which a final vote is expected today. “Well I have a message for American Pulverizer, owners Chris and Paul Griesedieck, and anyone else who wants to attack IAM members or working people – not on my watch! American Pulverizer: Stop surface bargaining. Negotiate a fair contract. We aren’t asking for much. We’re asking for what we’ve earned.”

Hundreds of St. Louis labor unions and folks from the community have shown their support throughout the strike, including members of Gas Workers Local 11-6 and Teamsters Local 688 who have been bringing by food and firewood. Local businesses like the Humane Society and Boyer Fire Protection have let the striking workers use their facilities for storage and personal matters.

U.S. Rep William Lacy Clay (D-MO) issued the following statement: “I stand in solidarity with the striking IAM workers at the American Pulverizer Company in their fight to restore dignity and fairness in their workplace. For 12 long weeks these valiant workers have steadfastly resisted the short-sighted and misguided attempts by a profitable company to impose drastic cuts in health care and other vital benefits. When labor and management work together we succeed as a nation. Now is the time for the company to sit down and bargain seriously in good faith with the workers and their union.”