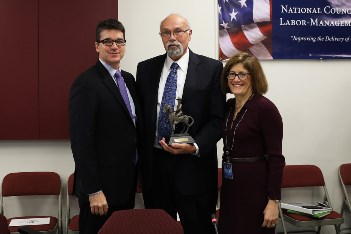 National Federation of Federal Employees (NFFE-IAM) National President William R. Dougan has been awarded the prestigious Theodore Roosevelt Award, the Office of Personnel Management’s highest honor, given to those who are courageous in defense of our nation’s merit principles.

Dougan was presented the award by Office of Personnel Management (OPM) Director Beth Cobert and Office of Management and Budget (OMB) Deputy Director for Management Andrew Mayock, who praised Dougan for his outstanding work on the National Council on Federal Labor-Management Relations and for his fierce advocacy of civil service federal employees.

“Throughout his time with NFFE, but particularly as NFFE national president, Bill has been a fierce advocate for the civil service employees he represents throughout the government,” said Cobert. “His advocacy for his members has benefited not only NFFE members, but the entire federal workforce.”

Dougan received this award one month from his retirement from a combined 39-year career as a federal employee and federal Union leader.

“I am so proud to see President Dougan receive this honor,” said NFFE National Secretary-Treasurer (National President-elect) Randy Erwin. “Bill has earned this recognition with a lifetime of dedication to federal service, his Union, and the betterment of the federal workforce. Nobody is more deserving of such an award than Bill.”

“Bill exemplifies the leadership that this award embodies,” said NFFE National Secretary-Treasurer-elect Dave Stamey. “Bill makes every day into a day to advocate for the principles this award represents”.

“I am truly humbled to receive this award,” said Dougan. “It has been an honor to represent NFFE-IAM members across the country, and it is gratifying to think that some of my work over the years may have improved their lives.”