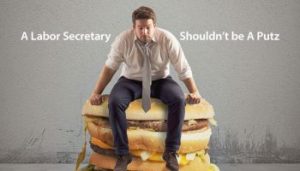 Working class Americans will have no one to turn to if Andy Puzder is put in charge of running the labor department. The incoming administration’s pick for Labor Secretary has a record of fighting against working people as CEO of the Carl Jr.’s fast food chain (CKE).

The fast food CEO is against raises in the minimum wage and paid maternity leave, and in favor of replacing workers with machines.

Under Puzder’s leadership, CKE has paid millions of dollars to settle lawsuits accusing them of various labor violations including forcing employees to work off the clock, misclassifying workers to avoid paying overtime and altering time records.

The AFL-CIO recently highlighted some reasons why Puzder is no friend to working people.

The pressure against the nominee is beginning to work. The confirmation hearings which were scheduled for this week have been pushed back and may not happen until next month. There are reports that Puzder has voiced second thoughts about his nomination.

Keep up the pressure.

The post Say No to the Anti-Labor Secretary appeared first on IAMAW.