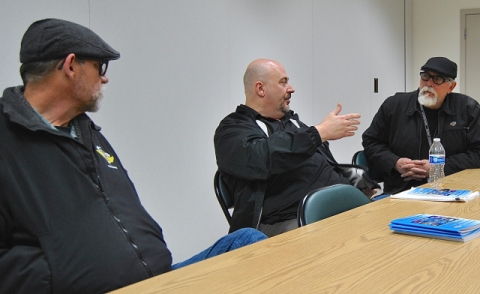 After one year of membership in the Machinists Union, union stewards at Cadence Aerospace-Giddens have this advice for workers at companies in the midst of union votes:

“None of it came true,” said Union Steward Gary Naple. “Nobody lost their job. The company’s still here. Our wages went up – they didn’t go down. We were told that we wouldn’t have an open line of communication with management, but it’s 100 times better than it was.”

Feb. 16 will mark the one-year anniversary of the date Cadence-Giddens workers ratified their first union contract as members of Machinists Union District Lodge 751. They approved the agreement with a 72-percent “yes” vote.

“This is a group of intelligent aerospace workers who could see through the company’s anti-union tactics and as result they have seen the benefits of sticking together to obtain better workplace standards,” said Allen.

The contract covers about 240 workers who produce precision-machined aerospace components, subassemblies and kits, and do sheet-metal forming for parts that go on Boeing, Airbus and Gulfstream jets.

This month, they’ll get their first general wage increases specified under the contract, of 2.5 percent.

For Union Steward John Combs, it will be the second-biggest raise he’s received in his nine years at the company. The biggest raise was the 85 cents an hour all Cadence-Giddens workers got when they ratified the contract a year ago.

“A lot of people had gone a couple of years with no raises at all,” he said. “Now they realize they’ve got raises coming, and they’re starting to get excited.”

In addition, the stewards say they‘ve gained from locking in health care cost shares for three years. A new pay schedule raised entry-level wages $1.50 an hour, plus workers got back a 401(k) match that management had taken away.

That combination means each Cadence-Giddens worker will take home thousands of dollars they wouldn’t have had without a union contract, the stewards said.

Besides the better pay, all of the workers are enjoying a bit more job security, because they are “just-cause” employees instead of “at-will” workers who can be fired at any time.

Union Steward Mike Powell said communication with all levels of management has improved. “They actually come and get me and let me know when changes are coming.”

Instead of knocking heads, union stewards have been working with Human Resources and managers to reduce workplace conflicts, Naple said.

Perhaps the greatest testament to the improved relationship is the fact that our union did not file a single grievance in the first year.

“We do have a form for it,” joked Business Rep Greg Campos, who represents the Cadence-Giddens workers.

That doesn’t mean stewards aren’t fighting for their members. Naple said he went to a manager about a safety issue that had been ignored for years – and it got fixed within a week. Combs said he recently worked with a manager to get an overtime issue resolved on the spot.

It wasn’t always this way. Before unionizing, Combs said certain managers would pick on workers. Nobody complained, Naple said, because “if you spoke out, you were treated as someone who needed to be walked out of the building.”

Anti-union consultants tried to scare Cadence-Giddens workers out of voting for the union, saying the plant would lose work and might just close.

“They started clearing out a space in the shipping department,” Naple said. “They said ‘When you guys unionize, all this work is going away.’”

But the stewards said hourly employment at Cadence-Giddens is virtually unchanged since February 2016, and the company has been able to win new work.

All in all, the situation is “completely opposite” of what the anti-union consultants said would happen if Cadence-Giddens workers unionized, said Campos.

“It’s been very good,” he said. “Together, we’re fostering better communication. We want to work together with management so that the company is profitable, while we make sure it does the right thing for the employees.”

Originally formed in 1935 by hourly workers at the Boeing Co., District Lodge 751 of the International Association of Machinists & Aerospace Workers now represents more than 31,000 working men and women at 53 employers across Washington and California.