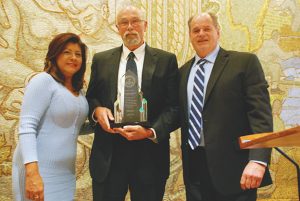 William “Bill” Dougan, National President of the National Federation of Federal Employees (NFFE-IAM), is retiring after nearly four decades of service to the federal workforce. His last day on the job was December 15, 2016.

Dougan, a former U.S. Forest Service worker and NFFE president for the past nine years, has played a key role in advocating for federal workers amid constant political attacks.

“The IAM has been honored to work side by side with Bill to fight for the best for federal workers,” said IAM International President Bob Martinez. “He’s been an absolute Journeyman for the men and women who make this country run every day. We wish him all the best in his well-deserved retirement.”

Under Dougan’s leadership, NFFE revitalized its organizing and communications strategies, which have markedly increased the union’s membership. Dougan has expanded the union’s voice to new individuals and forums nationwide.

Dougan founded and was elected chairman of the Federal Workers Alliance, a collective effort of 22 unions representing more than 300,000 federal employees. As a member of the National Counicl on Federal Labor-Management Relations, Dougan worked with top administration and agency officials to build strong labor-management forums.

Randy Erwin, a 15-year NFFE-IAM member, was elected to be the next NFFE National President at the union’s 50th National Convention in September.