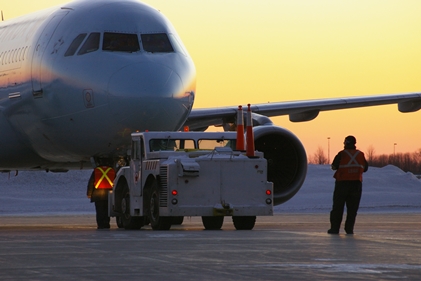 By planning legislation to allow foreign companies to own up to 49 percent of an airline in Canada, the Canadian government is risking thousands of IAM jobs, and those of other transport workers. (Air Canada jet pushback)

Speaking to the Montreal Chamber of Commerce last week, Canadian Minister of Transport Marc Garneau laid out the government’s new 2030 Transportation strategy and it is not good news for the 18,000 IAM members in Canada’s air transport sector.

“Once again the federal transport minister has sent the wrong signals to air transport workers in this country,” said IAM Canadian General Vice President Stan Pickthall. “This will create a huge negative impact on workers.”

Garneau stated that the government intends to introduce legislation that would raise the limit of international ownership of Canadian air carriers to 49 percent from the current 25 percent. The strategy opens the door for more corporate access, and less-regulated private investment in the already-troubled air transport industry.

The plan was developed based upon the Canada Transportation Act Review Report, which was launched in Spring 2016 to engage and include input from stakeholders throughout the country. The IAM, the largest union in Canada’s air transport sector, was not consulted for the report, however. Neither were other affected unions. The report ignored the impact of its recommendations on workers, their incomes, terms and conditions of employment, and the quality of work.

“As a result, this report leaves a void by not taking into account the voice of air transport sector workers,” said Pickthall. “Changing the foreign ownership rules to allow more competition and more bargain-basement airlines to flourish in Canada will set the path to a new cycle of uncertainty and even more precarious working conditions for our members.”

Click here to read the IAM’s response to the government’s report.