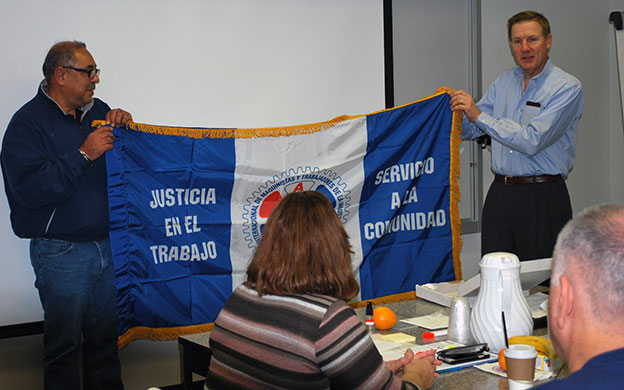 Members collaborated and brainstormed about the best methods to support and strengthen the IAM. Discussions on outreach to participants for the Spanish Leadership classes, the student’s subsequent return to their lodges and communities as prepared activists, and the importance of involvement were vital topics.

“As always it is truly a pleasure and an honor to be a part of this group,” said SLWG member Adriana Picasso, a Local 1759 (District 141) Steward at United Airlines. “With the experience and support of the instructors that founded the very first Spanish Leadership 10 years ago, we look forward to welcoming the next generation of instructors to the 2017 Spanish Leadership Working Group.”

As the political and legislative landscape heats up around issues affecting labor, it is critical for unions to grow by organizing in every region and demographic. One of the fastest growing sectors in the workforce are Spanish-speaking workers. Spanish Leadership classes are a key opportunity to educate these members.

The W3 Spanish Leadership and Staff classes for 2017 are as follows:

April 30-May 5: Spanish Organizing I (Participants Assigned by GVP)

Local lodges, districts, stewards and officers are encouraged to identify and enroll Spanish speaking/bilingual members. Like the English-language Leadership programs, the Spanish Leadership programs build a solid understanding of trade unionism and provide participants with the skills and tools they need to effectively represent and grow the membership.

Please note that enrollments in any of the Spanish Leadership programs do not count against your Lodge’s regular Leadership school allotments. Click here to download enrollment forms in either Spanish or English directly from the Winpisinger Center’s website.

If you have any questions about the Spanish Leadership Programs or need any additional information, please contact Edmundo Osorio at 301-373-8814 or email: [email protected].