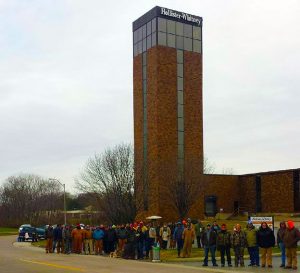 IAM Local 822 members in Quincy, IL are back on the job after a nearly two-week strike against employer Hollister-Whitney.

IAM Local 822 members in Quincy, IL are back on the job after a nearly two-week strike against Hollister-Whitney, an elevator parts company.

The more than 240 members returned to work after voting in a new proposal Wednesday, December 14.

The Machinists went on strike in early December after voting down the company’s proposal, which called for a six-year agreement, insufficient wage increases, a slow progression rate and high healthcare premiums.

The final deal is a five-year agreement with a 2.5 percent yearly raise and a doubled progression rate of 50 cents every six months until they hit the top rate. The signing bonus was increased from $1,000 to $1,500 and workers will now have premium caps on their health care with no increase the first year, and an additional personal day. In addition, each worker will receive a Christmas bonus of $150 for each year of service by next week.

“Thanks to our members’ determination, strength and solidarity, they were able negotiate a final deal that better reflects their worth and the hard work they’ve each put into this company,” said District 9 Business Representative/Organizer Ross Miller. “I’m glad we were able to get a deal. They received some justice on the job.”

“I am so proud of our Local 822 brothers and sisters,” said IAM District 9 Directing Business Representative Mark Conner. “I want to thank the bargaining committee and District 9 Business Representative Ross Miller for their dedication and hard work in, not only helping our members get back to work, but negotiating a deal that Local 822 members can be proud of. I would also like to thank the families, members of the community and other labor unions who came out to stand with the IAM on the picket line and donated food, money and fire wood. Their support made a huge difference.”

“Congratulations to the members of IAM Local 822,” said IAM Midwest Territory General Vice President Philip J. Gruber. “Their show of solidarity and tenacity, in the wake of the recent election and anti-union rhetoric spewing from Springfield and DC, is exactly the kind of fight we mean when we say we’re putting the fight back into the Fighting Machinists. Local 822 members are able to return to work today standing strong and proud. Congrats again, brothers and sisters.”

The IAM has represented workers at Hollister-Whitney since the 1940s. This year’s strike was the first strike at the company since the late 1980s.