The IAM and its members have always taken the time to find ways to give to those in need. This holiday season, across North America, that spirit is on display in a variety of ways. 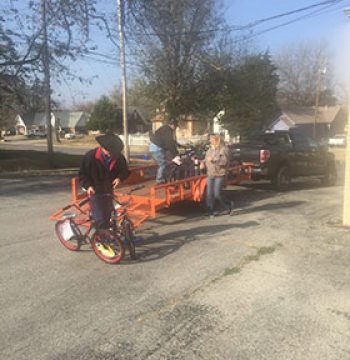 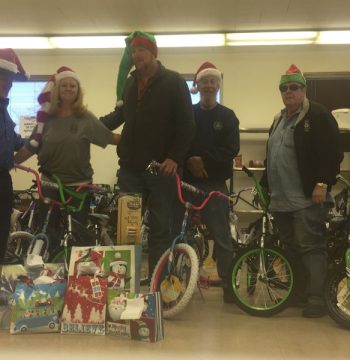 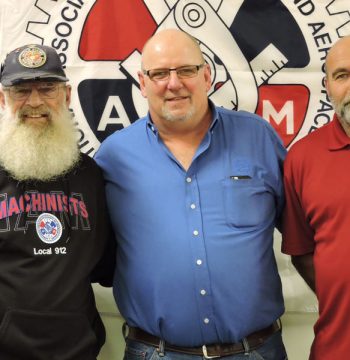 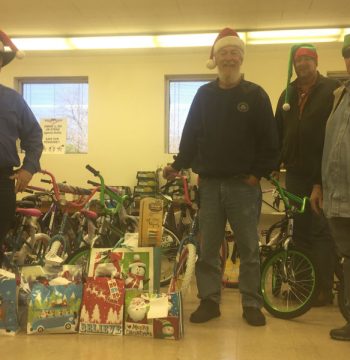 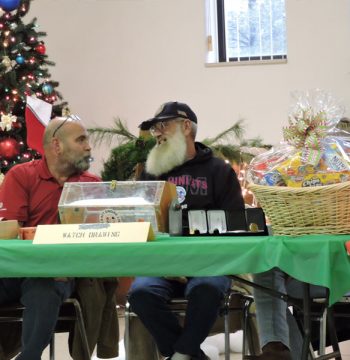 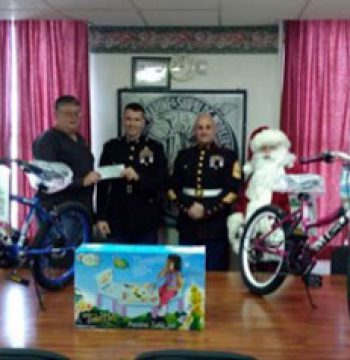 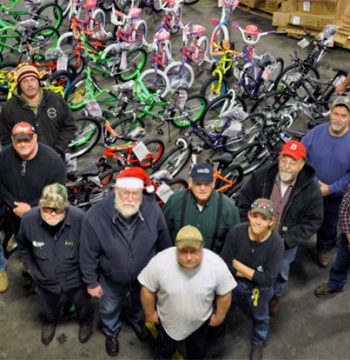 IAM Local 1280 in Newark, OH, along with the Electrical Workers (IBEW) and the Glass, Molders, Pottery, Plastics and Allied Workers (GMP), bought and assembled 125 bikes and helmets for the Salvation Army’s “Bikes for Kids” drive.

The 12-year tradition is carried on in the memory of deceased IAM member Dave “Stinky” Pugh, who along with his wife would donate several bicycles each holiday season to the program. The members, employed at fiberglass-manufacturer Owens Corning, raised money for the bikes through employee donations, contributions from other unions, local businesses and other organizations. Management has joined in by raffling off a vacation day, which has become a popular tradition in the effort.

“IAM Members play a key role in, and care about their communities wherever they are employed,” said IAM District 54 President and Directing Business Representative T. Dean Wright, Jr. “Yet this effort is a little more special, three unions and retirees coming out each year to pitch in, demonstrates the importance of the effort. Nothing embodies the holidays like kids and bicycles, all the while honoring the memory of a good union brother.”

Over the years, the Newark team has assembled, and donated more than 1,000 bikes to the program.

Bath, ME Machinists Local S6 held their annual U.S. Marines Corp Toys for Tots campaign. The local’s community services committee put out boxes in the Bath Iron Works Shipyard facilities for the week long toy collection, ending with a monetary collection day. The local presented a check to the Marines for $16,047 and a truck full of toys and bikes to be distributed throughout Maine for kids who are less fortunate.

Dallas/Fort Worth-area IAM Locals 776A, B, C and District 776 collected bikes for kids of Oklahoma City Local 850. Across the Southern Territory, a total of over $39,500 was donated for the families still recovering from their 112-day strike at Tinker Air Force Base.

In the fall the annual Hooks & Hawgs joint fishing tournament and motorcycle run was held to benefit the YRSC. In October the 18th Annual Golf Tourney was held to benefit Guide Dogs of America, and just this week the local held their annual Holidays For Heroes benefiting the families of deployed soldiers this Christmas.

In all, Local 912 raised more than $10,000 for their efforts, and many more in donations, but they weren’t done giving yet. The membership dug a little deeper, and contributed nearly $4,000 to the Shriners Burn Institute.

“I’m so very proud of the members of Local 912,” said Local 912 President Eric Kratzer. “Unions and union members are often characterized by corporations and politicians as greedy and selfish. Our members have proudly served our country, play active roles in their communities and, when the time comes to give back a little, are standing at the front of the line. My thanks go out to all who contribute, and participate in all of our benefits.”

“Thanks go out to all the members of the locals, and districts, who donate money and their time to carry out these worthy causes,” said Eastern Territory General Vice President Jimmy Conigliaro, Sr. “A big thank you goes to the retirees, other unions, the U.S. Marines and the employers, who not only contribute, but pitch in and work alongside our members to make these efforts successful.”

If you and your members are giving back this holiday season and would like your photos posted, please email Communications Specialist Jonathan Battaglia at [email protected].