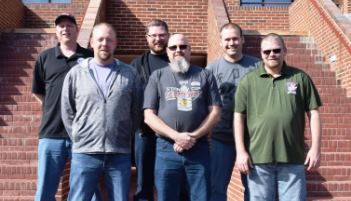 The IAM Local 66 Negotiating Committee, along with a staff member from District 10, recently participated in the Negotiation Preparation for Bargaining Committees program at the William W. Winpisinger Center in Hollywood, MD. The Committee represents employees at Ocean Spray Cranberries in Kenosha, WI, a leading producer of cranberry sauce and juice drinks.

The current contract with Ocean Spray Cranberries, Inc. expires March 1, 2017. Recognizing that this promises to be a difficult round of negotiations, the Committee strategized to bring a fair and transparent contract to its members while improving wages and benefits, addressing rising health care costs and securing union jobs for now and into the future.

“The week at the Winpisinger Center gave the Committee an opportunity to strategize and put a plan in place to address issues and concerns prior to, during and after the negotiating process,” said District Representative Joe Terlisner. “The Committee worked hard, and they leave the Center better prepared to advance the needs of the Union members they serve.”