Over 100 Fighting Machinists from the IAM’s Western Territory gathered in Portland, OR last weekend for a territory conference. Members participated in presentations organizing, bargaining, inclusion and representation focusing on growth, prosperity and strength. 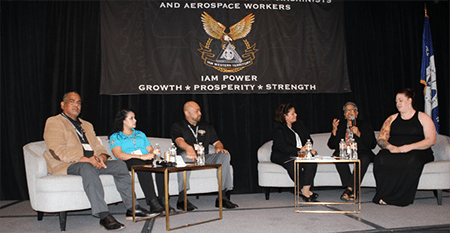 “The way we accomplish this is by demanding and when necessary we fight for a fair share of the incredible profits that Corporate America hoards – all we ask is a fair wage that affords a decent existing and that we all live a life with respect and dignity,” said Allen. “We have some of the best and the brightest in the IAM, they are the key to building our Union. The Leadership learned to understand differences, contributions and the strategic value of diversity and inclusion to building power.”

“Fundamentally, organizing is about building power for current and future members,” said International President Bob Martinez. “We build power so we can defend and advance the cause of dignity, respect, and economic justice in the workplace and in our communities. And because of the people in this room—and others like you across the United States and Canada—our new approach to organizing is working. That is great news for the working families we are welcoming into our union and great news for our current members who are benefiting from our added strength at the negotiating table.”

U.S. Sen. Jeff Merkley, son of a Machinist and raised in a middle-class home, spoke of the power of unions and collective bargaining.

“Workers deserve the fair share of the wealth they helped create,” said Merkley.