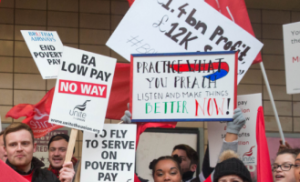 IAM airline crew members from across the United States are showing their support for striking British Airways Mixed Fleet crew.

Watch our Stand in Solidarity video.

The Mixed Fleet crew, which operates some long and short haul flights, has been subjected to lower pay and substandard employment conditions compared to other British Airways employees since the carrier created the group after a 2011 strike.

“The International Association of Machinists and Aerospace Workers wholeheartedly supports the striking sisters and brothers represented by Unite,” said IAM Transportation General Vice President Sito Pantoja. “We commend you for taking action against the conditions British Airways created and send you wishes for victory.”

Stay up-to-date with the strike at UniteTheUnion.org.