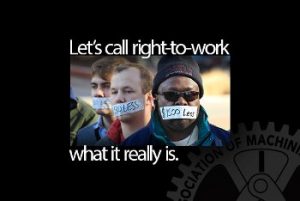 In the second week of January, what do legislators in states nearly 1,300 miles apart have in common? If you guessed working on laws to help improve the lives of the citizens of their states, you would be wrong.

Lawmakers in Missouri and New Hampshire are the latest to conduct hearings on so-called “right-to-work” laws allowing workers a “free ride” and to opt out of paying union dues while still receiving the benefits of a union contract.

Missouri lawmakers have passed “right-to-work” in the past, only to be vetoed by Governor Jay Nixon. Newly-elected Republican Governor Eric Greitens has already said he will sign the anti-worker bill when it reaches his desk.

The first public hearing for the “New Hampshire Right to Work Act” is being held today. The battle over this law has been waging for decades in the Granite State; but it has a much better chance of passing with Republicans having control of both houses and the governor’s office. If passed, New Hampshire would be the first New England state to go “right-to-work.”

Lawmakers in Kentucky wasted no time pushing their anti-union legislation by eliminating the state’s prevailing wage for public construction projects and passing “right-to-work” legislation this week. State representatives are also looking at legislation to restrict a union’s right to deduct dues from member’s paychecks, requiring them to collect dues individually.

Of the important issues these states’ lawmakers could address in 2017, they all seem to be focused on crushing middle-class workers. If you are a resident of any of these states, contact your representative and let them know that “right-to-work” is wrong for workers.