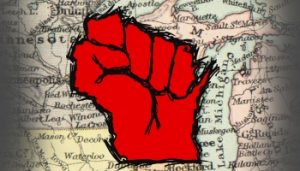 Wisconsin IAM District 10 and Local 873 have struck another huge win for IAM members and working families throughout the state in the fight against GOP Gov. Scott Walker’s right to work (for less) law.

A U.S. District Court judge has sided with the Machinists Union and ruled a portion of the law, which prohibited “dues checkoff authorizations” unless revocable upon 30 days’ notice by an employee, is in direct violation of federal law.

The Labor Management Relations Act (LMRA) states that unions may maintain dues checkoff authorizations, so long as the deductions are not “irrevocable [by the employee] for a period of more than one year.”

The ruling is the second win for IAM District 10 as it continues its ongoing fight against Walker’s right to work (for less) bill, signed into law in 2015. A Wisconsin judge sided with the IAM in a case challenging the state’s private sector right-to-work law back in April 2016.

“IAM District 10 is proud to score another win against Gov. Walker and the GOP’s continued overreach of power and assault on Wisconsin’s working families,” said IAM District 10 Directing Business Representative Alex Hoekstra. “Right to work hurts workers. This win brings clarification to the law and will make it easier to negotiate dues checkoff in our contracts – which is what our members want.”

Research shows that by many measures, the quality of life is worse in states with right to work laws: wages are lower, people are less likely to have health insurance, the quality of education is lower, poverty levels are higher and the rate of workplace fatalities increase.

While the recent court decision does not impact Wisconsin’s entire right to work law, other parts of the law are currently being challenged by District 10 in separate litigation.

“Congratulations to IAM District 10 and Local 873 on a job well done in fighting to protect the working families of Wisconsin,” said IAM Midwest Territory General Vice President Philip J. Gruber. “Your union is very proud of you. But the fight is far from over. We must continue to fight this law until justice and fairness is brought back to the people of Wisconsin – and every worker living in a right to work state across the United States.”